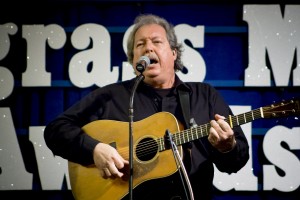 Russell Moore has once again been named the Society for the Preservation of Bluegrass Music of America’s (SPBGMA) Male Vocalist of the Year! The SPBGMA Awards were held Sunday, February 7th in Nashville, Tennessee as the concluding event for the organization’s annual National Convention. The event draws thousands of fans, musicians, and industry professionals from across the country. Moore has won this particular honor numerous times. Moore and IIIrd Tyme Out also performed during the convention. (Photo by LuAnn Adams)