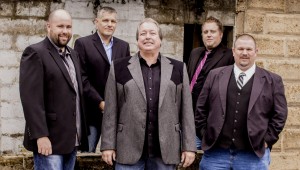 IT’S ABOUT TYME REMAINS #1 FOR FORTH CONSECUTIVE MONTH, “BROWN COUNTY RED” REACHES #1 ON NATIONAL BLUEGRASS SURVEY’S TOP 30 SONGS, MOORE FEATURED ON TOP 30 COUNTDOWN SHOW
Russell Moore & IIIrd Tyme Out have reached a new career milestone with their latest album, It’s About Tyme. Released September 4th on Break A String Records, It’s About Tyme has been the fastest charting album in the band’s history, making its debut on the National Bluegrass Survey’s Top 15 Albums at #2 in November, climbing to #1 in December, and remaining at the top of the chart for an unprecedented four consecutive months through March! Additionally, the first single, “Brown County Red” is #1 on the National Bluegrass Survey’s Top 30 Songs chart. Rounding out the Top 30 Songs chart are two more tracks from the album; “I’m Leaving You And Fort Worth Too” at #3 and “Had It Not Been For The Train” coming in at #23.
In celebration of the overwhelming chart success of It’s About Tyme, Russell Moore will be the featured guest on this month’s Top 30 Countdown with Lee Michael Demsey scheduled to air on WAMU’s Bluegrass Country on Friday, February 26th at 4pm ET, with repeat broadcasts on Saturday March 5th at 6am ET and Friday, March 11th at 8pm ET.
The success of their latest album comes just as IIIrd Tyme Out begins celebrating their “Tyme For 25” tour marking their 25th anniversary of making ground-breaking music and becoming one of bluegrass music’s most iconic bands. This landmark tour will kickoff with a special extended performance at the Willow Oak Park Bluegrass Festival in Roxboro, NC on April 30th, a LIVE concert broadcast on SiriusXM Bluegrass Junction on May 5th, an appearance with Coffee, Country & Cody on WSM 650AM the morning of May 6th followed by a special “Tyme For 25 Celebration Concert” at the Nashville Palace (Tennessee) on the evening of May 6th.
“We are so thrilled and excited at all the highlights garnered by our latest recording, It’s About Tyme,” says Russell Moore. “I don’t think we’ve ever had a project, along with singles, to climb to the top of so many trade and radio charts this quick! According to many of our peers and fans of our music, It’s About Tyme is their favorite recording we’ve ever released! Thanks so much to all our friends and fans, radio programmers and reviewers for your kindness and support of It’s About Tyme as we celebrate its success along with 25 years in the music industry!”
Tweets by @iiirdtymeout