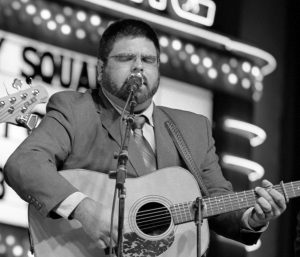 The International Bluegrass Music Association’s (IBMA) 5-Time Male Vocalist of the Year, Russell Moore, is proud to announce the addition of  Dustin Pyrtle to his award-winning band, IIIrd Tyme Out. Dustin will hit the road in January with IIIrd Tyme Out as their newest bass player, bringing his renowned vocals to the group’s popular trio and quartet arrangements.

Dustin Pyrtle has been singing since his teen years, eventually performing professionally with bands such as Broken Wire, Alan Bibey, and The Josh Williams Band. In 2013, he joined Doyle Lawson & Quicksilver, his vocals key in helping the band garner two GRAMMY® nominations in 2016 and 2017 as well as the IBMA’s Vocal Group of the Year in 2018. Just prior to joining Quicksilver, Dustin traveled with IIIrd Tyme Out, assisting Russell with vocal duties while he was on doctor-ordered vocal rest. During that time, Russell became a fan of Dustin’s talent and looked forward to an opportunity to work together again.

“I have been following Dustin’s career since he helped us out a few years ago when I was dealing with a really bad case of laryngitis,” says Russell. “With the holiday season unfolding, ‘Santa Claus’ brought us a wonderful gift when Dustin agreed to take over the bass playing and harmony vocal position in the band. His obvious talent will be a joy to share the stage with, as well as his genuine good nature off stage, and I share in the excitement we all have for 2019!”

Of his new venture with Russell Moore & IIIrd Tyme Out, Dustin says, “I am thrilled to be part of this great band! Russell has always been a part of the reason I started listening to bluegrass all those years ago. Words can not describe the happiness I feel to know I am going to be part of this band and I’m looking forward to 2019 in a way I never expected!”

Dustin will make his official debut with Russell Moore & IIIrd Tyme Out when the band kicks off their 2019 tour with their annual appearance at the Galax,VA Fairview Ruritan Clubon January 5th,followed by with a steady string of shows throughout the year. For more information on Russell Moore & IIIrd Tyme Out including a complete tour schedule, please visit www.iiirdtymeout.com.