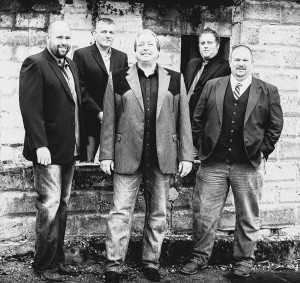 For Russell Moore and the award-winning IIIrd Tyme Out, their appearance at Milton’s Mountaineer Opry House on Saturday, March 5, marks the beginning of an important 2016 for the group as it celebrate its 25th anniversary as a band. The group’s “Tyme for 25 Celebration Tour” officially kicks off in May with a live concert at the Nashville Palace in Nashville. Before then, however, the Tri-State gets to have some fun with the group this weekend.

Over the quarter of a century history of IIIrd Tyme Out, the group has won seven International Bluegrass Music Association Vocal Group of the Year awards, mostly in the 1990s. But the band has also made its mark in recent years as original member and leader Moore has won five IBMA Male Vocalist of the Year awards, including in 2012.

And, the group’s most recent recording, “It’s About Tyme,” has topped the Bluegrass Unlimited Magazine album chart for four straight months.

The members of the group include Moore on guitar and lead vocals, Wayne Benson on mandolin, Justen Haynes on fiddle, Keith McKinnon on banjo and Jerry Cole on bass.

As Moore enters the 25th anniversary year of the band, he looks back on his early years in Texas where he discovered bluegrass music before eventually relocating to his long-time home in Georgia.

He said that although he remembers one of his older brothers playing a guitar around the house when he was younger, and his younger brother Steve recorded with him as The Southern Connection, none of his family members pursued full-time careers playing music.

While Moore would be the only one to take a real stab at making it in the music world, bluegrass music was heard in the family’s house on a regular basis.

“Our family would go to bluegrass music shows when I was very young,” Moore said. “While we brothers still lived at home, my mom and dad really got into bluegrass music due to some cousins of theirs, and we started going to a few festivals in Texas and Louisiana. I remember going up to Oklahoma to Bill Grant’s bluegrass festival in Hugo three or four different times. There were also monthly bluegrass shows within an hour or an hour-and-a-half drive from where we lived. That is how I got introduced to the music.”

Eventually, Moore began to notice what was going on onstage, and bluegrass music was soon in his blood.

“To be honest with you, at first I wasn’t interested in the music,” Moore said. “I was more worried about getting dirty and running around with the other kids and playing at the places we would go. Then, I started taking note of the people that were playing the music. One of the most endearing things was the fact that people would be jamming here and there at festivals, and you could walk right up to them and get an eyeful and an earful.”

He said his mother would order a few albums every month from County Sales, including two Osborne Brothers album which had a big impact on him – “Voices in Bluegrass” and “Our Favorite Hymns.”

“When I heard those two albums I was like, ‘Wow.’ That got the bluegrass bug going with me,” he said.

Soon, Moore began to play in bands as a young man in the Lone Star State.

“The first group I ever actually performed with and was a part of was The Bluegrass Ramblers of Texas,” Moore said. “We played a show just outside of Cleveland, Texas, in a place called the Blue Barn. We were the host band there on the first Saturday night of every month when there was a bluegrass show. Johnny Martin, who has passed on now, was the leader of the group. Larry Sparks would be traveling through and would stop by and play a show. Doyle Lawson and Quicksilver also came by a few times.”

Little did Moore know then that someday he would become a member of Lawson’s band Quicksilver, and after that would be a part of the 25-year history of IIIrd Tyme Out.