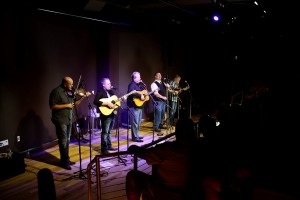 When Russell Moore & IIIrd Tyme Out walked on to the stage in the Birthplace of Country Music Museum’s Performance Theater in Bristol, Virginia, last Friday night, the crowd was ready for them. The show, which debuted the band’s new album It’s About Tyme, was also broadcast live over the museum’s brand new radio station WBCM, and members of the station’s team had already primed the audience. The crowd was loud, appreciative, and eager to hear the first all-new music from the band in several years. As Tony Lawson, the station director and host for the evening’s performance, later put it, it was not only a bluegrass crowd, it was a IIIrd Tyme Out crowd.

The first “big” bluegrass concert I can remember going to – not including small local festivals where Ralph Stanley and the New Coon Creek Girls were frequent headliners – was IIIrd Tyme Out’s Back to the Mac recording at the Mountain Arts Center in Prestonsburg, Kentucky. My grandfather, whose status as a bluegrass fan stretches back to seeing the original Blue Grass Boys at a schoolhouse up the road from his childhood home, just had to go, and I tagged along. I’ve been a loyal fan of the group ever since, and I try to see them anytime they make it to east Tennessee.

The setting on Friday in Bristol wasn’t much like that first show I remember. Instead of a large, arts center auditorium, the museum’s theater is narrow and intimate, well-suited for radio recording, with room for perhaps seventy-five to one hundred audience members. The band stood on a small, floor-level stage just a few feet from the first row of seats. Russell Moore provided a fine description when he told the audience, “This was a great place to perform. I can just about reach out and touch you!” The concert was sold out, and even though the crowd was relatively small compared to many of the group’s shows, I’ve rarely seen a more enthusiastic audience. Every song drew loud clapping and cheering, shouts of “Yeah, man!” and “Get it, Russell!” Impressive instrumental breaks and tight harmonies were rewarded with applause and smiles.

The band opened with the new album’s popular first single, Brown County Red, then segued into a few songs most audience members had never heard from IIIrd Tyme Out: Gary Scruggs’ haunting Lowlands, an upbeat take on the Carter Family’s Are You Tired of Me My Darling, and two new tracks that were among my favorites. Banjo player Keith McKinnon’s twin brother Kevin wrote the catchy Had It Not Been for the Train, which wonders where all the bluegrass and country train songs would be without the title subject, along with Eli Johnston. When Moore asked about the song’s inspiration, McKinnon jokingly said that he and his brother “used to play with trains when we were little.” They followed it with Josh Miller’sEnough for You, which has quickly become one of my favorite songs about lost love. 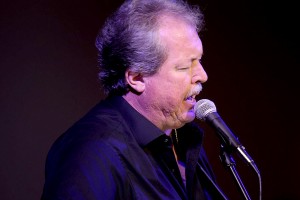 Moore seemed to enjoy singing Milan Miller’s Poison Cove, which has a twist in the last verse. “You gotta pay attention,” he told the crowd. “You might see it coming, but it might surprise you too.” The audience loved Wayne Benson’s instrumental Spindale, which he said he named in the tradition of Bill Monroe, “after places you go.” Other audience favorites were the reworking of Keith Whitley’s I Think I Want My Rib Back(featuring Benson’s electric mandolin) and Cottontown, which had the room echoing with the sound of feet tapping along.

Of the album’s fourteen tracks, they only skipped two (River Bottom and You Send Me, the latter perhaps due to the absence of bass player and bass vocalist Blake Johnson), but substituted two previous hits in their place. Any fan of IIIrd Tyme Out could probably guess the two “classic favorites” the group chose to close out their performance. Erase the Miles brought out a few tissues, and John and Marybrought everyone to their feet.

The songs on It’s About Tyme are excellent, but the band’s live performance of them was even better. I’ve been a fan of the group for fifteen years, and this was one of the tightest, most enjoyable shows I’ve seen from them. Buy the album, yes, but also get yourself to a concert soon. It will be worth it.